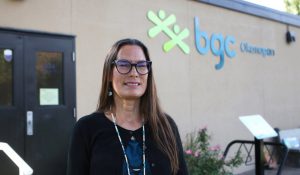 Sʔímlaʔxʷ Michele Johnson, the executive director of the Syilx Language House, stands outside of BGC Okanagan Martin Avenue Club in Kelowna during the unveiling of the organization’s Nsyilxcən language sign in October. Photo by Aaron Hemens

BGC Okanagan, in partnership with Syilx Language House, unveiled signage to be placed at 12 Clubs across the Okanagan to engage and share knowledge of the traditional language of the Syilx Okanagan People.

On Oct. 3, the Nsyilxcən Sign Project was unveiled at the BGC Okanagan – Martin Avenue Club with Syilx Elder and knowledge keeper from the Westbank First Nation, Wilfred “Grouse” Barnes, giving a prayer and a drum song from Marnie Gregoire, of the Okanagan Indian Band. The signage brings the traditional language of the Syilx Okanagan People, which is classified as critically endangered, to Clubs and the public through interactive displays.

“The true magic of this project is bringing both the written language and audio of Elders and Language Keepers using accessible QR codes. This act of reconciliation has fostered learning, relationship, partnership, and language revitalization,” said Becky Kirkham, Manager, Early Years at BGC Okanagan and BGC Okanagan Truth and Reconciliation Committee member.

The signs feature a passage explaining the relationship between the Syilx and their land and beginner words and phrases in the traditional language with translation to English. A QR code (which can be scanned with a smartphone) links to audio of Sʔím̓laʔxʷ Michele Johnson, Executive Director of Syilx Language House Association, providing pronunciation of the words. The late Sʕamtíc̓aʔ Sarah Peterson provided audio for the passage.

“BGC Okanagan has been wonderful to work with and we are grateful to have BGC Okanagan and several other community partners incorporate language into their workplaces. It’s a step in the right direction,” said Johnson.

To-date, the committee has developed this partnership with the Syilx Language House who extended an invitation for BGC Okanagan childhood educators to take beginner’s language workshops. The committee has also set short and long-term goals in a Truth and Reconciliation Activation Guide for BGC Okanagan, made investments in Indigenous children’s literature into Lending Libraries and Club programs, made resources available for all staff, participated in the Walk for Wenjack, toured Scwenswips Museum with staff to enhance knowledge in a local context, participated in Orange Shirt Day activities, developed a BGC Okanagan Land Acknowledgement, established a Truth and Reconciliation commitment statement, and other actionable steps.